Heart smart: Leading the way in the D

For 150 years, Wayne State University not only has educated medical professionals in the heart of Detroit, it has also forged new paths in cardiovascular health. From pioneering procedures to community engagement, here are a few key examples of how Warriors are helping people live longer and stronger.

In 1952, Dr. Forest Dewey Dodrill drew international attention to Detroit when he became the first surgeon to use a mechanical heart pump on a patient at Wayne State’s Harper Hospital.

Although new technologies have continued to be developed to correct heart problems, heart-lung machines are a mainstay for cardiac surgeons. With very high rates of survival and success, open-heart surgery is one of the most commonly performed operations in the United States.

“We’ve come a long way since that first heart operation by Dodrill in 1952,” said Dr. Larry Stephenson when WSU was commemorating the surgery’s 50th anniversary. Stephenson is professor emeritus of the WSU School of Medicine’s Department of Surgery and author of the book Detroit Surgeons: 300 Years. “Without some form of blood pump or heart-lung machine, many of the heart operations we routinely do [today] would not be possible.”

Before Dr. Adrian Kantrowitz was a Wayne State School of Medicine professor, he accomplished a feat for the books. In 1967, while on staff at Maimonides Medical Center in New York, he performed the first heart transplant in the United States, just three days after the first such procedure in the world by a surgeon in South Africa.

During his career, Kantrowitz designed more than 20 different mechanical devices to treat cardiovascular issues, including an early version of an implantable pacemaker.

“Dr. Kantrowitz was one of the real innovators in cardiac surgery, one of the real pioneers,” said Stephenson in 2008, on the occasion of Kantrowitz’s death at age 90. “His biggest contribution was the intraoral balloon pump, which saves hundreds of thousands of lives every year worldwide.”

In 1970, Kantrowitz left Brooklyn for Detroit, bringing his team of surgeons and staff to Sinai Hospital and the WSU School of Medicine, where he served as a Department of Surgery professor. 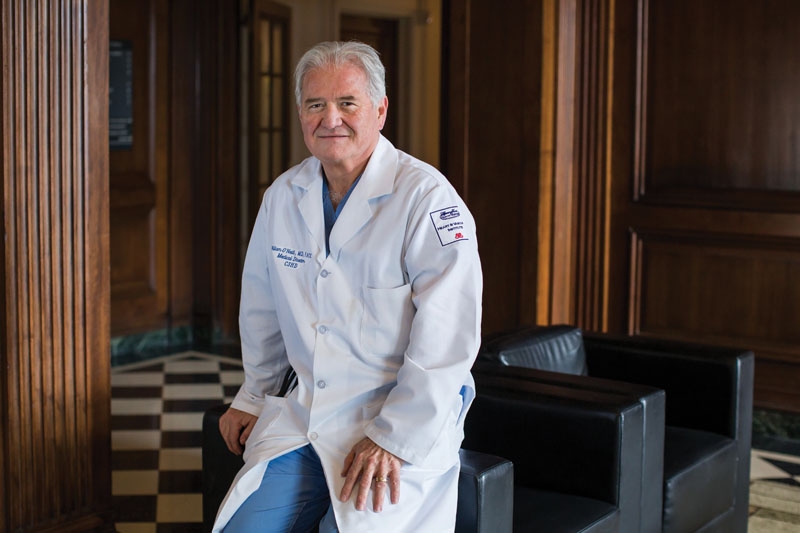 The use of angioplasty to treat heart attacks is the standard of care among today’s cardiologists, but when WSU alumnus Dr. William O’Neill began working to pioneer the method in the mid-1980s, it was considered revolutionary. He ended up battling for years to win widespread acceptance of the procedure, but his ultimate success turned him into an internationally recognized figure in the field.

At the time O’Neill began his work, doctors were already using angioplasty to prevent heart attacks by inflating a tiny balloon at the site of a blockage. As the balloon expanded, it compressed cholesterol building up and other unwanted substances against the artery wall, reopening the channel. O’Neill reasoned that angioplasty could be used in an emergency situation, and wrote research paper after research paper to finally bring other doctors on board.

O’Neill had pursued a dual career as a cardiologist and researcher after earning his medical degree at WSU in 1977, writing more than 300 articles and abstracts for medical journals and breaking new ground in the operating room. In 2005, he was the first surgeon in the United States to perform an aortic valve replacement through a catheter.

“One of our greatest strengths as an academic institution is our patient population,” says Phillip Levy, M.D., M.P.H., professor of emergency medicine and assistant vice president of Translational Science and Clinical Research Innovation for WSU. “Detroiters suffer from substantial health disparities that we need to concentrate on.”

To that end, the Center for Translational Science and Clinical Research Innovation serves as a focal point for WSU faculty to work with community agencies and industry partners to improve health and promote wellness in Detroit.

Levy also is serving a four-year term as a member of the National Institutes of Health’s Cancer, Heart and Epidemiology Study Section to review NIH grant applications, and is leading a number of his own WSU studies related to cardiovascular disease.

In 2016, Levy was tapped to help lead a hospital cardiovascular accreditation collaboration between the American College of Cardiology and the American Heart Association. He said at the time, “It is very exciting, and helps place the Wayne State University School of Medicine at the forefront of quality and process improvement effort as it relates to cardiovascular care.”

Heart Walk with us

During the Sesquicentennial Celebration kickoff in January, President M. Roy Wilson challenged his fellow Warriors to collectively perform 150,000 hours of community service by the end of 2018.

An appropriate way to help meet that challenge is by participating in the Heart Walk that President Wilson is co-chairing on Saturday, May 12. Funds raised through this partnership between Wayne State University and the American Heart Association will go toward cardiovascular disease research and education.

To join a team, collect pledges, and walk or run through campus on May 12, visit go.wayne.edu/heart-walk18.

As part of our Sesquicentennial Celebration throughout 2018, Wayne State University will share stories that highlight the people, places and moments that contribute to our 150-year history. Learn more at 150.wayne.edu.